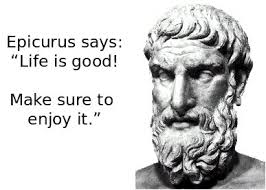 I just finished reading a really awesome book about a philosophy called Stoicism. I’ve heard that Stoicism is practiced by several successful entrepreneurs. I like and agree with a lot of what Stoics recommend for achieving happiness and living life. Below are six sets of Stoic beliefs and how they translate to entrepreneurship.

Appreciation & Fear. Stoics periodically contemplate (but not worry about) “worst-case scenarios.” It’s a practice they call negative visualization. It’s practiced for a few reasons. First, to lessen the impact if these scenarios do come true. Second, to reduce insatiability and appreciate what we currently have. Negative visualization is to prevent ourselves from taking for granted the things we worked so hard to get. Including our friends, family, house, company, etc.

Entrepreneurship is extremely risky. There’s a chance for deals to fall through, the company to fail, etc. By practicing negative visualization, one may reduce the impact if/when it happens.

In addition, it’s intended to help us appreciate what we already have, whatever that may be. In starting a company, an entrepreneur is probably striving for something highly ambitious. Changing an industry, building a massive company, etc. I consider it a true gift to be able to work on entrepreneurial ventures. We should remember we’re lucky to even have the opportunity to do what we’re doing.

Control, Hope & Goals. Stoics believe in focusing on what’s in our control, and not what’s our of our control. They believe wanting or hoping for things that are not in our control will disrupt our tranquility.

“It is impossible that happiness, and yearning for what is not present, should ever be united.” – Epictetus

In goal setting, Stoics therefore set goals that are internal. They don’t worry about what’s external, or out of one’s control. For example, the goal when pitching an investor would be to do it as best possible, not for the investor to actually invest. It avoids frustration of losing it without reducing our chances of losing it, and it reduces our insatiability, or yearning for something that’s out of our control, which is believed to cause unhappiness.

Success & Duty. A Stoic does not pursue wealth for wealth’s sake, but might nevertheless attain it, because a Stoic will do what he can to make himself useful to fellow humans. If effective in helping, he will likely be rewarded.

As an entrepreneur, I consider customers my boss. I strive to figure out what’s of most valuable to them, deliver it, and capture it.

Willpower. In addition to negative visualization, Stoics sometimes live as if the negative things had actually happened. For example, instead of merely thinking about what it would be like to lose wealth, they would periodically practice poverty. The goal is to content ourselves with the less.

Self-denial is not practiced for punishment, but to enjoy what we have, and to harden ourselves against misfortunes that might happen in the future. Someone who tries to avoid discomfort is less likely to be comfortable than someone who periodically embraces discomfort. The latter individual is likely to have a much wider “comfort zone” than the former and will therefore feel comfortable under circumstances that would cause the former individual considerable distress.

In getting a company off the ground, living a luxurious life may not be an option for some entrepreneurs. Starting a company takes a lot of hard work and usually some money. By practicing self-denial an entrepreneur may be better prepared for the hardships.

By forging pleasure, one is believed to experience pleasure of a different kind: pleasure for exercising willpower. Willpower is like a muscle: the more we exercise it, the stronger it gets.

Startups require lots of hard work and long hours. I try to take pride and pleasure in exercising willpower and pushing myself to work harder.

Stress. Stoics believe we are the source of any feeling we experience.

Entrepreneurship is of course very risky and challenging. Entrepreneurs inevitably face many roadblocks and rejections on the route to success. The challenges and uncertainty can be quite stressful. By altering our psychological attitude toward failure, we can alter the degree to which we fear it.

Freedom & Personal Values. People are unhappy, the Stoics argue, in large part because they are confused about what is valuable. Because of their confusion, they spend their days pursuing thing that, rather than making them happy, make them anxious and miserable.

Stoics value their freedom, and they are therefore reluctant to do anything that will give others power over them. If we seek social status we give other people power over us. What people think of us is also something that’s out of our control. Stoics believe that many people are haunted by a fear that in some cases significantly constrains their freedom, namely, the fear of failure.

If that’s not a call for entrepreneurship I don’t know what is! 🙂